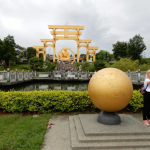 Scholars of New Religious Movements who like to combine academic presentations with fieldwork might profitably consider attending CESNUR events. This year’s annual conference was held in Taiwan, and was timed to coincide with the unveiling of the world’s largest statue of Guiguzi, and which was attended by 5,000 people, and to which conference attendees were invited. Guiguzi, whose name … END_OF_DOCUMENT_TOKEN_TO_BE_REPLACED

ISSNR (the International Society for the Study of New Religions) will conduct its first membership meeting in connection with the CESNUR conference at Alethei University in Danshui, Taiwan, between June 21st-23rd. … END_OF_DOCUMENT_TOKEN_TO_BE_REPLACED

The newest issue of Nova Religio. The Journal of Alternative and Emergent Religions have been just published. This is a special issue dedicated to the study of religious leadership in new religions.

We are pleased to announce the publication of Nova Religio 24.3. online.ucpress.edu/nr/issue/24/3. Includes articles on Vedic wisdom in Russia, the Medjugorje pilgrimage site, Queer Mennonite leadership, and Hindu statuary among spiritual seekers. Also, a memorial for our colleague Liselotte Frisk. ... See MoreSee Less

The War-Locks and The Hem-Locks and the The Dread-Locks: Have any of you questioned why Israelites are behaving they way they are behaving, hating, brewing hate, and harming Palestinians, bombing them, expelling them, evicting them from their homes and Palestine, usurping their homes, usurping their property, stealing with self-authorised permits and auto-biographed authorisations ? Creating Apartheid, Walls, Barriers, Discriminating, Separating, and Out-Casting Palestinians ? This is abhorrent aberrant behaviour of hating others and stealing from others ? Where are the expelled Palestinians supposed to go ? Why are the expelled families not recompensated or resettled ? Why are Israelites carrying out these barbaric crimes of hatred and Evil ? Why dont Jewish people condemn Israelites and Zionists ? Why are Jewish people and Jewish Race silent and supportive of the War crimes in Israel by Israelites and Jewry War-locks and Hem-locks ? Why don't Jewry condemn the Apartheid of Israelite Jews and JEWISH ZIONSTS ? WHY IS THEIR RACE SO SO SILENT ABOUT THESE CRIMES ?

Open Access book on the demise of religion is now available.

Bloomsbury Collections - The Demise of Religion - How Religions End, Die, or Dissipate

The new issue of the International Journal for the Study of New Religions have been just published.